Disney Kicks-Off Summer With a 24hr Coast to Coast Party: Rock Your Disney Side!

Giant Balloons Fill the Sky With Color and Excitement at Balloons Over Paradise Event! In it’s third year, the Ballons Over Paradise Festival, continues to bring excitement and joy to South West Florida.  Brought to Immokalee by Semi nole Casino, people flock to see over 60 hot air balloons take flight as the sun rises.  With gates opening at 6am, the balloon teams get in place and begin inflating.  Colorful and pretty balloons fill the grounds but as you look around there are a few extra special ones that catch your eye with their unique designs. Hysterical Hamlet the Flying Pig, piloted by Doug Gantt, spooky Purple People Eater piloted by John Cavin and cutsie Sugar Bear piloted by Dave Jaques are the specialty balloons that make you squeal with delight.

Other balloons that were making heads turn were the Elvis and Sharky balloons.  At 140 feet tall, Sharky is one of the tallest balloons to fly in the United States.  The Elvis balloon, well let’s just say even the hound dogs were digging it.

The Clown balloon made you giggle as soon as you made visual contact with it. A big red smile on a happy guy, smiling at the sky, my oh my. Young and old waited in line for the exciting tethered air balloon rides.  One rider beamed with happiness as she climbed out of the basket and thanked the pilot as this was on her bucket list.  The tethered (tied down with a rope)  balloon rides were $15 and can go up between 25 and 100ft.  It’s a safe bet for those that are too nervous to try a true flying balloon ride for their first time in a hot air balloon. In order to climb into the rides basket that can hold about 5 people, a group of people must hold it down and as one passenger climbs in on one side, the other passenger climbs out on the other side.  This way the basket is kept even weighted until ready for lift off.  As you can imagine the balloons natural desire is to float, so there are strong guys holding down the ropes keeping it steady for the guests to climb in.  Once in, you start floating up and the ride is gentle and freeing.  No wild movements, just a smooth ascension.  Everywhere you turn to look, you have a view.  At no point, did I feel scared, it was exhiliarting and something I look forward to experiencing again.

The pilot of the hot air Balloon we rode said he had over 30 years experience and had gone to flight school and safety school .  When he would fill the mouth of the balloon, you could feel the heat but you  actually felt it more if you were standing near the basket on the outside, as opposed to being directly underneath it.

The very first untethered hot air balloon to take flight was in 1783 in Paris, France.  However, it didn’t become a thing in the United States until Ed Yost, father of modern day hot air baloon invtented them in the 1950’s.

This year, Seminole Casino brought to the festival a Polo Exhibition, the first of its kind in South West Florida.  Professional player, Kris Kampsen was to showcase the sport rules and even provide a meet and greet to the crowd, along with other players.  Not only could you have a ride of a lifetime on a balloon ride, but you could catch a Polo match, two very unique events to SWFL. market at the balloon festival

The Kids Experience/Kids zone set up in the Seminole Cultural Village provided face painting and demonstrations on Seminole beading, sewing and archery to name a few.  If balloon rides, Seminole tradition or polo didn’t float your boat, they even had a classic car show with the Florida Hot Rods and Hogs.  For those that decided to come later in the day, musical entertainment was provided by the Rachel Hughes Band, JJ McCoy and Sister Hazel.

Among the vendors, you could find local Seminole and Miccosukee artists and craftsmen selling their beautiful products.  There were dream catchers with medicine bags, garments, artwork and jewelry. One local artist recycled alcohol bottles into lighted lamps.  The festival was in town for two days, from 6am to sunset, giving you plenty of time to catch a glimpse of the Balloons Over Paradise.  There was something for everyone to enjoy.  Make sure you don’t miss this amazing event next year. 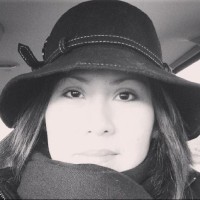 A writer at heart, Janeth has been writing poems and stories since elementary school. She enjoys sharing her experiences in motherhood, parenting and life on her blog, In the Motherhood Full of Dreams. A graduate of Rutgers University with a degree in communication, she truly enjoys the process of researching, writing and communicating information, especially via social media. Janeth loves the beaches of South West Florida and is always up for a new adventure with her husband and two children. You can find her writings on her blog and on www.BeingLatino.us and follow her on twitter @MhdFullofDreams